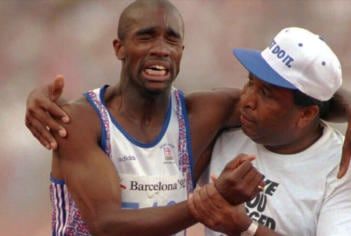 If you don’t know who Derek Redmond is, after watching this video, it should be hard to forget him.

One of Britain’s most famous athletes is Derek Redmond. In 1985 when he broke the 400m British record achieving a time of 44.82 seconds.  He is a World and European relay champion. Having broken the British 400m record on two occasions, Derek was one of the country’s top athletes during the 1980s and 1990s. He was also a well-known member of the relay squad that won gold medal at the 1991 World Championships in Tokyo.

This inspiring video shows a scene from the 1992 Olympics in Barcelona,  where while representing his country, Redmond became part of one of the most inspirational scenes in Olympic history.

Redmond was one of the ones favored to win the 400 meter semi-final race.  But as he passed the 250m mark he tore his hamstring. The video shows how determined and resilient the human spirit can be. Redmond refused to quit, and he continued to hobble towards the finish line.

A man from the bleachers somehow pushed past the security and onto the track. With a few waves of his hand to the security he quickly reached Redmond. No one knew who this other man was at the time except for Derek Redmond.  He burst into tears as the other man puts his arm around him to help support him.  It was Derek’s father, Jim Redmond.

Together they headed for the finish line. With assistance from his father, Redmond managed to complete a full lap of the track as the crowd gave him a standing ovation. Completing the race was voted one of the most inspirational moments in Olympic Games history.

Unfortunately, this injury signalled an end to his Olympic career. However, Redmond was committed to not letting his injury keep him down for the count.

A true inspiration, Redmond continued to make the most of his life. After being told by a surgeon that he would never run again or represent his country in sport, he decided to prove his doctor wrong.  As a result of this, he began to turn his attention, with the encouragement of his father, to other sports that he enjoyed.

Redmond formerly served as Director of Development for sprints and hurdles for UK Athletics. He also has played basketball for England and played Rugby 7s. He even went on to play professional basketball for the Birmingham Bullets. Derek’s story is truly inspiring. To top it all off, he now works as a motivational speaker sharing his remarkable story with audiences up and down the country.

Start Your Impossible and Stay Motivated

Immerse your SELF in the dazzling Northern Lights, nature’s winter magic. Allow your eyes, mind, and soul to float into this swirling, magical, dancing light of the Northern Lights. Enjoy…
watch now